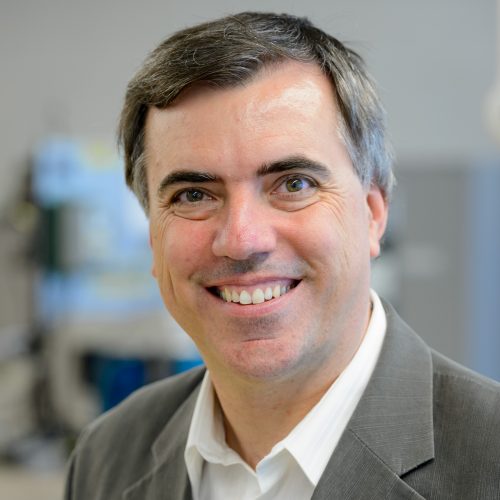 The commercial development of many electrochemical systems, including a variety of fuel cell types and batteries, pollution control and electrosynthesis, is hampered by kinetically sluggish electrode reactions. The mission of our research program is to discover and investigate selective, durable and cost-effective electrocatalysts and to integrate the catalyst structures with the electrode and cell design in order to develop high-performance electrochemical devices and processes. To accomplish our mission we deploy a multi-pronged approach combining fundamental experimental electrochemical and surface science studies of the electrocatalytic activity with theoretical insights into the catalytic activity, development of methods for nanostructured electrocatalyst deposition on electronically conductive 3D substrates and electrochemical cell and reactor engineering advancements.

The oxygen reduction and evolution reactions (ORR, OER) are two of the most important reactions in electrochemistry with myriad of applications. We developed a class of doped/intercalated MnOx catalysts that are suitable for a range of applications such as: alkaline rechargeable metal-air (e.g., Zn-air, Al-air, Li-air) batteries, water electrolysis, regenerative alkaline fuel cells and oxygen depolarized cathodes for electrosynthesis.

Graphene has tremendous potential for applications in alternative energy systems. However, its production is still problematic and some of the common methods involve harsh and aggressive chemicals that are misaligned with its ‘green technology’ image. We developed a ‘green’ method for simultaneous anodic and cathodic electro-exfoliation of graphitic precursors in ionic liquids for production of high-quality and high-concentration graphene micro-flakes. The graphene micro-flakes showed excellent results in microbial fuel cell anodes and as microporous layers in PEM fuel cells.

3. Electro-oxidation of borohydride in aqueous and molten electrolytes, borohydride fuel cells and batteries

Borohydride has the 2nd highest theoretical specific energy density among all fuels after hydrogen. The fuel cell applications of borohydride (e.g. NaBH4) have been intensely investigated by our group. We demonstrated the first mixed reactant borohydride fuel cell using the Swiss-roll cell design, and more recently, we were also the first to investigate the borohydride oxidation in a molten eutectic electrolyte.

The CO2 redox flow battery invented by Dr. Gyenge, uses a CO2-based redox couple at the negative electrode coupled with an inexpensive and fast electrode kinetics redox couple at the positive electrode. It is based on bifunctional catalysts and it constitutes a novel option for utilizing CO2 in a carbon-neutral loop of alternative energy storage and generation, while reducing green house gas emissions.